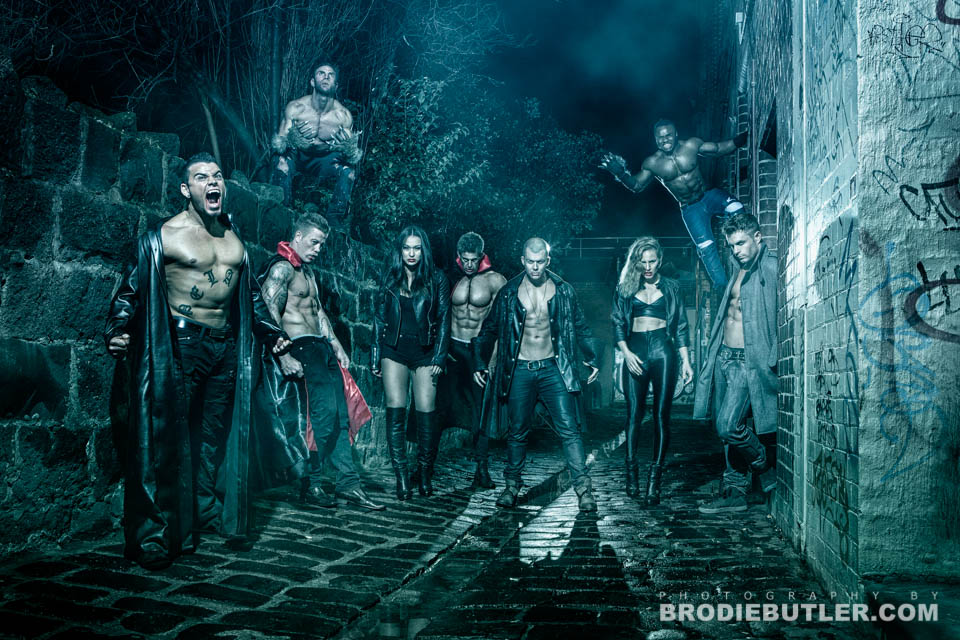 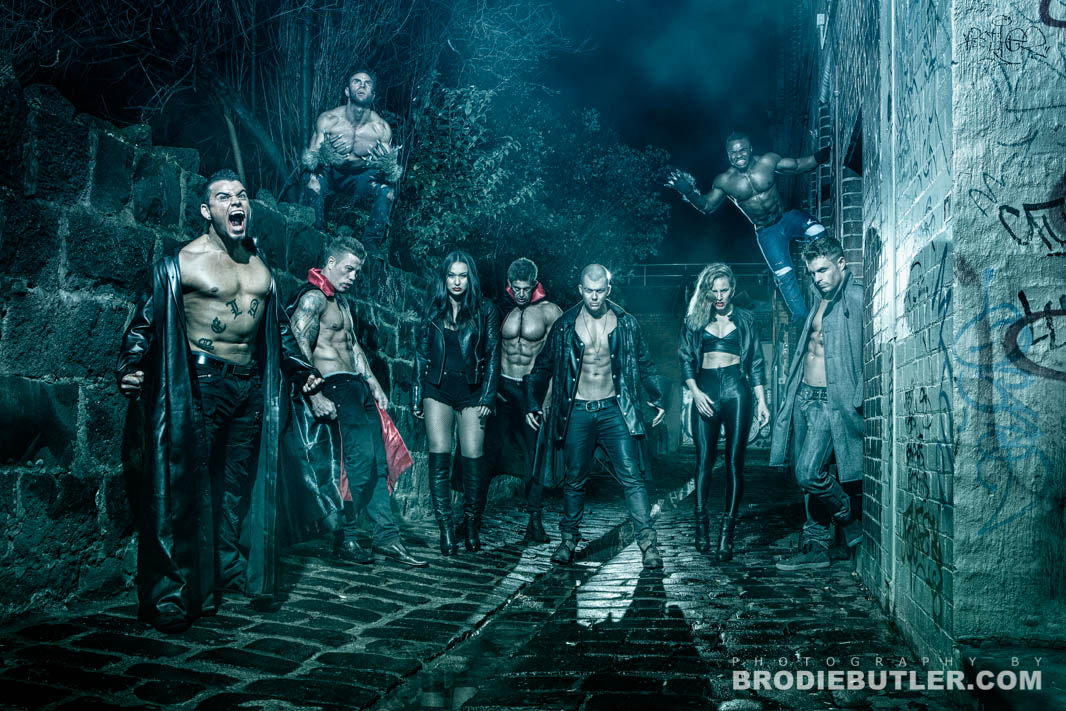 This is my latest bit of work fresh from Melbourne for Top Shelf Entertainment.  In true Melbourne style the weather was severely against us on this one. As we rocked up for the final location scout a few hours prior, it starting bucketing down with rain, and it didn’t look like it was going to ease up anytime soon. There was absolutely no possibility of rescheduling either.  Organising a large group of people can be very difficult, but this time was particularly tricky. There’s a lot of hard working inspiring people with demanding schedules in that photo above. Not to mention two of them were heading overseas the next day and even I was getting on a plane a few days after the shoot as well. So that’s fine, the choice was made for us and we had to move forward and make it work. Three little words I tend to say a lot… “make it work”.  I’m told I like the pressure and the challenge, and that’s probably true. Bring it on.

So while I was trying to assemble lights on light stands out the back of my hire car getting absolutely drenched, everyone else had to get ready at a nearby friends house we had taken over. Make-up, blood capsules, fake fangs and all sorts of other interesting props were all prepped for the cast, and probably a few push ups thrown in to keep warm and keep those muscles pumped.  We had to wait for a late arrival which was planned, so that gave us some more time an opportunity to catch a clear patch in the rain. While we waited, Top Shelf Founder and Choreographer Leigh, helped me to direct each of the cast into where they will be standing and what they will be doing. Since we were preparing for rain, this rehearsal was crucial because once we got out there, we would literally have to shoot a few frames and get out of there. There was no time for moving people around to try get the the perfect shot.  It was certainly a challenge.

With my head buried in the back of my hire car while my body gets soaking wet, I luckily found some plastic and bubble wrap I travel with and it was just enough to safely wrap an Elinchrom head and a speedlight to save it from the rain. It probably wasn’t waterproof but it was going to get me through 5 minutes of shooting. There was a fair amount of gaffa tape involved that gave me the confidence to move forward. 🙂 We then sourced as many umbrellas as we could. The idea was to have our very helpful minions hold them over the camera, battery pack and lights.

When it came to crunch time, would you believe it… Melbourne gave us a break in the weather! It was actually a bit creepy, the rain stopped just as we were ready and gave us just enough time to get the shot we needed. Even though it wasn’t raining we still executed it very quickly. I had a very simple lighting setup and the whole crew knew what they had to do, so it was job done in a matter of minutes.

Here’s a traditional behind the scenes shot of me with the talent! 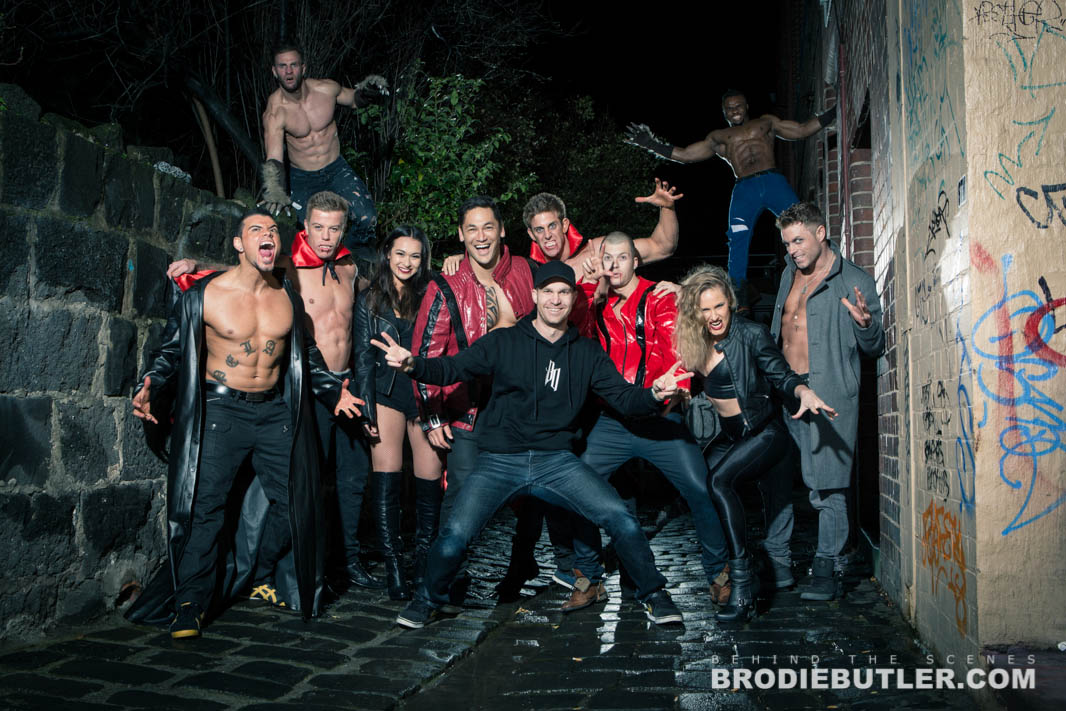 This was shot on my trusty 5D MKIII with just two off camera light sources. I had my ever reliable workhorse power pack with me, namely my Elinchrom Ranger RX Speed AS. Out of that I had a single head with a deep reflector on it and it was about as high as my light stand could go. I wish I had my bigger Manfrotto stands with me but that are too big to travel with. So instead, I had an assistant hold the stand as high as they could safely, to get that extra height. The reason for the height is the light was a fair distance away from the group. So the further back it goes, the higher it needs to go to get the desired angle. To make all the abs on these boys really pop I needed to build strong shadows which is done by getting my main light nice and high.

The reason for having the main light so far away, was to get a nice consistent exposure across my whole scene. There were 9 people in this shot and they were all spread out quite a lot. So I wanted to ensure that I had a nice consistent flash exposure from the foreground to the background. I knew I wouldn’t get it perfectly, but I needed to minimise the fall off of light. It really needed to reach up the back, just enough so I had enough flexibility to be able to adjust it in post production.

My second light was just a Canon 580EXII speedlight on a stand about 8 metres behind them all. I say “just” a speedlight, but to be honest I shouldn’t talk them down at all. They aren’t cheap and they still pack a fair bit of punch! I have 4 speedlights and I use them regularly. I love how small and nimble they can be.

Here is a before and after of the resulting shot. There wasn’t any compositing in this one, I just gave it the Brodie Butler once-over with some cool effects, some clever dodging and burning, some filters and some clever sharpening and detail enhancement. 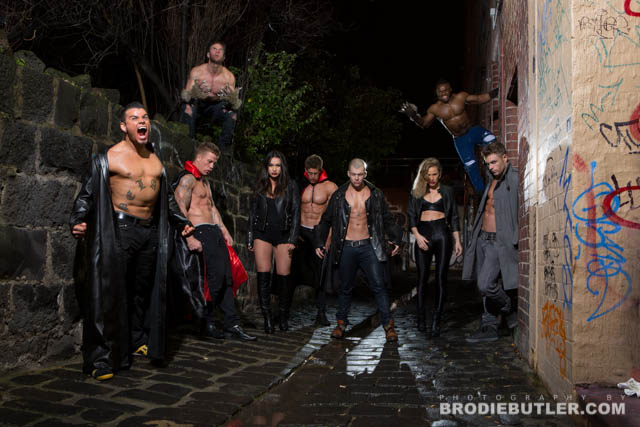 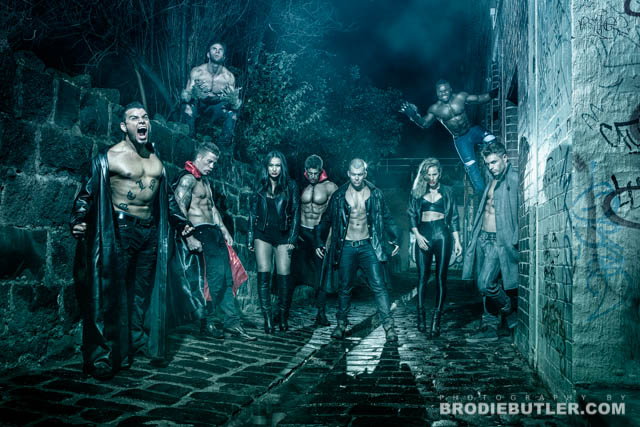 If you’re a Top Shelf fan or you follow my work you may remember the True Blood artwork I created for the Perth show a couple of years back. In this image we based it around a victim with a werewolf and group of vampires hunting her down. It’s a bit different to the new Melbourne version though, where just everyone is on the hunt! 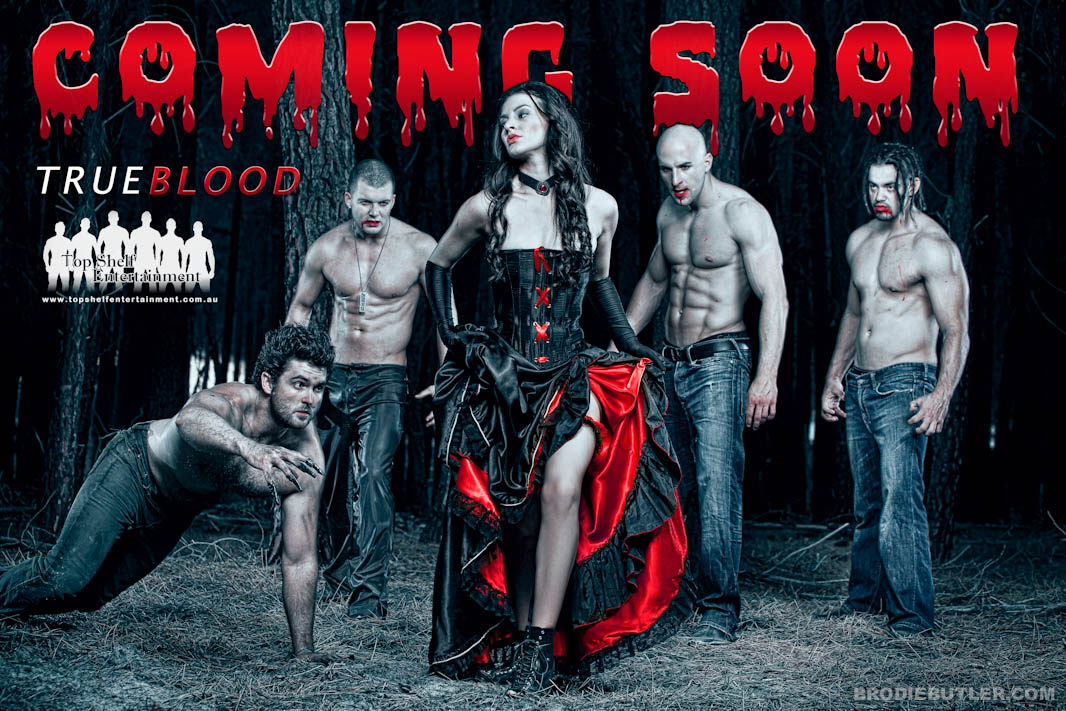 Thanks to all that helped!