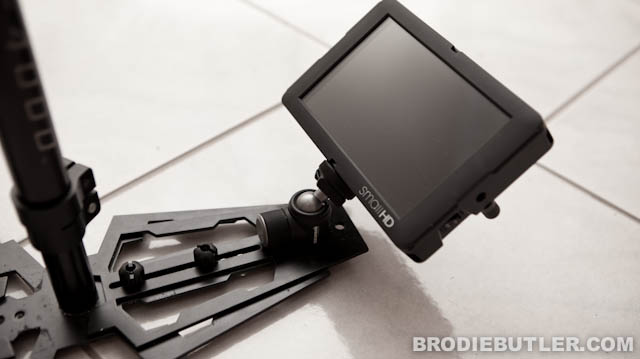 Mounting the SmallHD DP6 Monitor to the Glidecam HD-4000

The SmallHD DP6 Monitor is the latest addition to my arsenal of gear and I posted some info on receiving it just over a week ago here and gave a run down on my first impressions. Those first impressions were good by the way! Anyway since then I have been playing with it a bit and I have to say I’m very happy. Pulling focus and monitoring the live video feed is so much easier and much more rewarding over the standard LCD screen of my 5DMKII.

Click the title to read more on how I mounted it to my Glidecam HD-4000….

Now it’s time to get this puppy mounted onto my Glidecam HD-4000 which is the other main reason I wanted this monitor. I operate a Merlin Steadicam Arm and Vest bundled with a Glidecam HD-4000 which is essentially a full steadicam rig. In terms of Steadicams this is at the baby end of the scale, but its still a serious peice of equipment and it still achieves amazing results. The main downside to this rig I guess is the limited weight it can support. It is not designed to carry a large camera combined with remote follow focus units and wireless transmitters and large battery packs and larger monitors…. all that stuff is out of the question.

Being a HDSLR user though, I can still get away with a few extras thanks to the small size and weight of the camera. The SmallHD DP6 is an excellent monitor solution for me, and the fact it doesn’t require cables or additional battery packs is a bonus.

Weighing in at only 373 grams (12 Oz) it doesn’t cause any weight problems.  I have two LP-E6 (5DMKII batteries) batteries attached to the back which add a minor amount of weight but it still keeps my rig well under the maximum capacity.

To connect my DP6, I used a Cullmann CB2.7 Mini Ball Head. This head is the smallest of the CB ballheads, weighing just 85 g (3 oz) with construction of anodized aluminum and it can support up to 1 kg (2.2 lbs). The cool part of this head is it has an adapter with 1/4″ camera screw but it also has a hot shoe mount to give you the opportunity to mount a flash or microphone etc.  You simply just invert the adapter on top of the head.

The circular nob can be turned to loosen and tighten the ball head and its very smooth and feels like a quality piece of gear. The ball head moves in all directions as you’d expect and there is a slit on the far side so you can mount whatever it is your mounting, completely flat as shown below.

To connect the monitor to the camera I simply used a 1.5ft Mini-HDMI to HDMI cable which you have to carefully run up the Glidecam to make sure it won’t interfere with your filming. Some people have made modifications to allow the cable to travel inside the stem of the rig. I found the 1.5ft cable to be the perfect size.

Thanks to Ashley from Camera Electronic for pointing out this little ball head. I was originally going to purchase a Manfrotto Ball Head with a quick release plate which was obviously much larger, but I think I saved a good amount of weight by choosing this Cullmann.

This is a small update for Henry who asked about the cable.  The image below shows the cable running from the camera and then being attached to the stem of the glidecam. That little loop makes room for my hand and needs to be just big enough so that I can pan the camera around in both directions without it hitting my hand. Usually I will tape the cable down to the end of the cheese plate to hold it better in position too. In this image, the cable is sticking out too much.  The only thing that changes for a DSLR, is the cable comes out on the other side. To stop the cable sticking out too much at the top, invest in a right angle (90 degree) HDMI port adapter.

I don’t need to mount a battery on the back of the glidecam for my monitor. Since I own multiple 5D cameras, I have plenty of 5D batteries. So I purchased the battery adapter from SmallHD that allows me to use the 5D batteries with the monitor. I can sit two of them on there and they snap in and out super fast. Not only that but the camera is so much more mobile/portable!