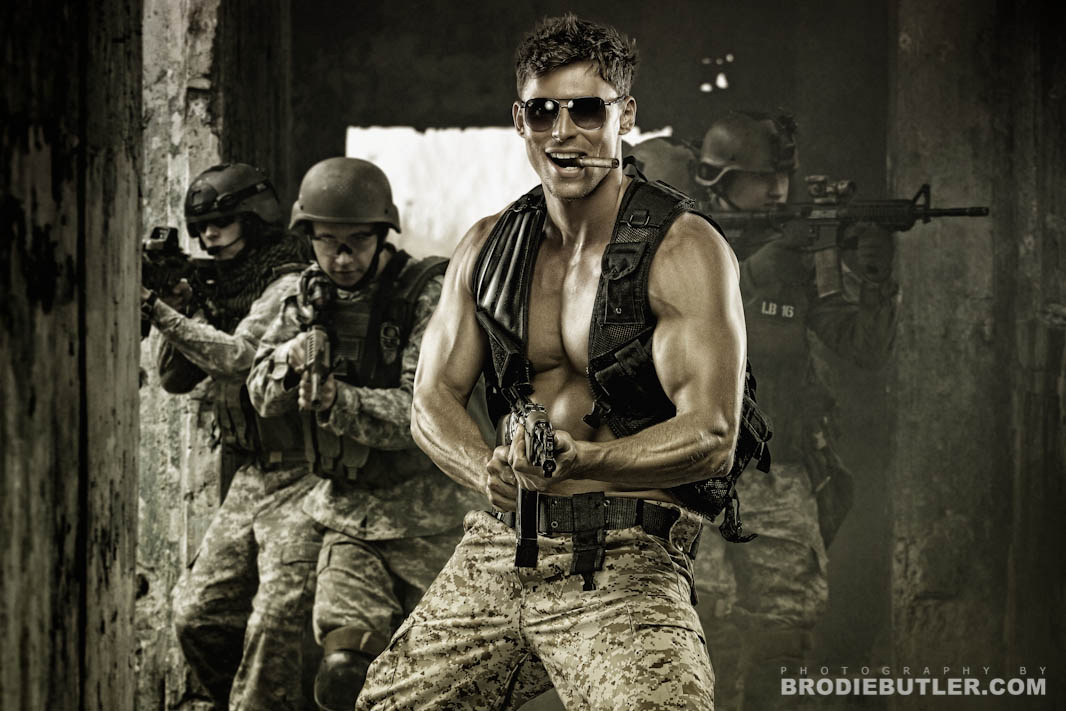 Creating these composites for Top Shelf Entertainment was a lot of fun and for those of you who follow me on facebook you have probably seen a few of these already. There’s over a dozen composites done all up and I have been slowly sharing them on the blog, some with more info than the others. Here for example, is a post explaining how I created the photoshop composite for the Fireman image and some good tips on how to blend the colours from your background and your subject to produce more realistic composites.

This image above of Dan is an excellent example of this tip.  You can clearly see that the colours of Dan in the foreground have been matched to make him look like he’s a part of that scene. Without any blending of the colour balances between the background and the subject, Dan would look very out of place.
Below is probably my favourite composite of the bunch. Titled “Commando”, this composite features Gav sporting a rather large machine gun of some kind and a chain of bullets which I believe are actually upside down. (So a military friend tells me). The bullets probably don’t even match the gun but who cares!

The male subjects in all of these composites were shot on the same day in the same location. The setup was a very simply one which I have talked about before in this post.  It was a basic grey background and 3-4 lights. Here is a before and after image demonstrating what has happened to the original photo above.

Here’s a tip… Whenever you have to see your subjects feet in a composite, it adds an extra step that is so crucial to faking the image.  It’s important that their feet look like they are actually in the scene, so you need to take into account the shadows around their shoes, and of course the shadow of their body that may be cast as well!

I spend a lot of time burning in shadows around the shoes to make them look part of the scene. It can be tricky to get it right, but a bit of persistance and trial and error and you’ll get it.  A small additional trick of mine, is I like to make sure the lower half of the legs and feet are underexposed relative to the rest of their body. This way the viewers attention is focused AWAY from the feet. Check out this before and after image below to see the effect shadows have. The bottom is much more believable right?! (pay attention to the feet and under the truck)

We always knew there had to be a Naval Aviator from none other than Top Gun. This is a very popular show from Top Shelf Entertainment and has been around since the beginning of their stage shows. A large Navy ship stock image that I was able to use and had the right angle, was rather difficult to come by but I managed to secure this one below.

So what Lighting did I use? Well my trusty Elinchrom Ranger RX Speed AS battery powered pack was on hand as per usual. That pack goes with me everywhere and I absolutely love it to pieces. Not just the pack though, but the Rotalux softboxes that I can setup in just seconds are such a relief when working on location. Here’s a Behind The Scenes shot of the setup we used for these composites.

So firing up top is the Elinchrom Rotalux 100cm Deep Octa, which is mounted on a C-Stand. To the left you will see the larger 135cm (53″) Octabox. This was being used for some general fill light and I was moving it around a fair bit.  Behind the subject at equal distances I had 80 x 120cm softboxes mounted to some old Visico studio strobes I have. These were creating the beautiful soft edge/rim lighting on my subjects.  The grey background was just to make the extractions in photoshop that little bit easier and we didn’t need to iron out every crease.  I had the background available so use what you’ve got right?

Of course in the foreground there you can see my 5DMKII with 70-200mm F2.8 L attached, and there is a Yongnuo RF-602 trigger in the hot-shoe triggering all the lights.

It’s amazing how much you learn and progress when you have to sit at a computer and create 12+ Photoshop composites to one deadline. It’s not something a lot of people would do unless they had a job come along that called for it. Like me. 😉  It has a massive benefit of really taking your skills and workflow to a new level and any new techniques you’re using really sink into your brain. The downside I find though, is that by the time you get to the last image, you already want to go back and re-do the first one! You’ve fine-tuned your style and workflow over days of retouching, and you want to go and apply the improvements to your first image.

Well I still love this image above, but it was my first of the batch and being the picky perfectionist that I am, I feel I could probably do it better now that I’m equipped with a few more tricks up my sleeve. It still works though and the client is super happy, so there’s no need to.

Hope you enjoyed these, I still have a couple more composites to show that I did for Top Shelf Entertainment, but you will have to wait a bit longer.