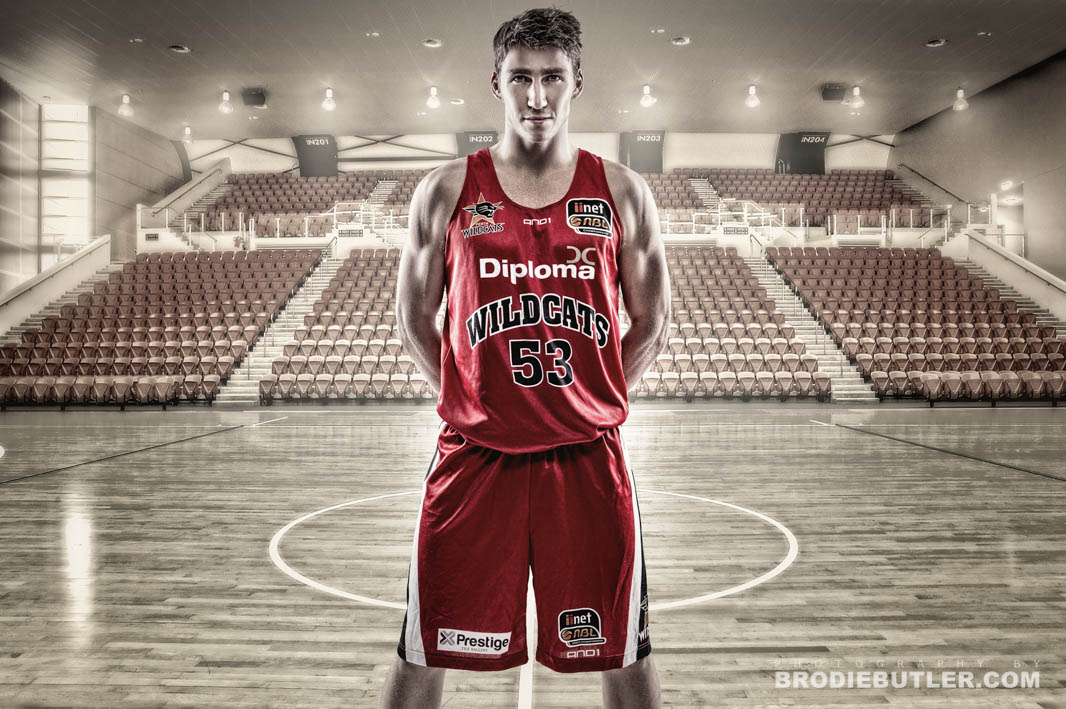 It may not be known to many of you that I’m actually quite the basketball fan and have been involved in the sport from a very young age still to this day. So teaming up in the studio with Perth Wildcat and NBL Championship player Damian Martin was a great day to be a photographer for me! A big thanks goes out to fellow shooter Grant Lauterbach for helping set this one up and as per usual, thanks to Karl Pearce for being my right hand man on this one.  These portraits with Damian showcase my new direction in portraiture work.  I have been doing a lot of portrait composites the last year or so and this is the next step. This style is a little more suited to athletes, musicians and other artists of various types.  It’s a blend of a number of my techniques and I’m still refining the process.

The 2012/13 iiNet NBL (National Basketball League) Championship  season is about to get underway very soon with the first home game for the Perth Wildcats being played at the brand new Perth Arena on November 16 2012.  So a brand new stadium for the new season is an exciting feeling and the wildcats look to be in good form for the season.  Now to help fill that stadium, the Perth Wildcats have initiated Project 10K.

Project 10K is the exciting new Perth Wildcats membership initiative that aims to see the club reach 10,000 season members by the first home game of the season on November 16 2012. So the team are trying to encourage everyone to get on board and support the team. As an incentive to help assist with referrals, they are giving away a heap of prizes including a major prize valued at over $10,000 which might just have something to do with the NBA. So nows the time to jump onboard and join the red army!

So anyway, for you photographers out there here’s a little bit of tech from behind the scenes. We all met up at Pop Studios in Leederville and I have to thank Julian from Pop for being so accomodating for us. These portraits are obviously composites and as much of a location based shooter that I am, I prefer to be warm and cosy in a nice clean studio to shoot these. The talent usually prefer it too.  In the studio it’s much easier for me to control the light and makes it much easier in post production to extract the subject.

So Damian was shot on a white background in a simple 3 light setup. I utilised two large softboxes as rim lights on a 45 degree angle behind Damian and I let these do most the work for this style. Then a beauty dish front and centre above the camera is used to just offer some fill light. If you were taking a reading of this light it would be  underexposed. How much? I couldnt tell you. I won’t get into the light meter debate now, but I just keep adjusting it until the image looks how I want it to look.

I was shooting with my 5DMKIII tethered into my 15″ Macbook Pro which was running Lightroom 4.1. How you ask? Well as 5DMKIII owners might already know, Lightroom doest not yet support tethered shooting with the MKIII yet. Determined to make it work I figured out a solution below.

How to Tether a 5DMKIII to Lightroom
I used the built in Canon EOS Utility software that came with the camera and has a remote shooting capability. So I used that to shoot tethered to my Macbook Pro.  Then using the interface provided I specified the folder I wanted to save the files to as they came in from the camera.  Jumping over to Lightroom 4, I used the auto-import feature which you can find in the File menu. I changed the auto-import settings to look at the folder that I was saving the images too from the EOS Utility.  So now the second an image is saved into that folder from my camera, Lightroom will automatically import it!  I minimised the EOS utility, set Lightroom to full screen (SHIFT-CMD-F) and I was in business!

The HDR Background
Most people that know me will know how much I hate HDR. Well that’s not entirely true. HDR can be very useful and when used correctly and not done over the top, it can give you exciting results. I shot these backgrounds myself and you may recognise the location as the WA Basketball Centre.  Now these backgrounds were merged into HDR, but the creative effect you can see has more to do with all post production after the HDR. I just used HDR to get some more details out of the shadows and give me some options. I have been through so many revisions of these backgrounds and I have so many different versions now, I just had to use one and release SOMEthing. So here they are. Hope you like them.  This was one of the first portraits I’ve done in this new style and I may have gone over the top a little bit, but some people will love it, and some wont. Oh well.

Anyway before I go here’s a few more behind the scenes shots for you.