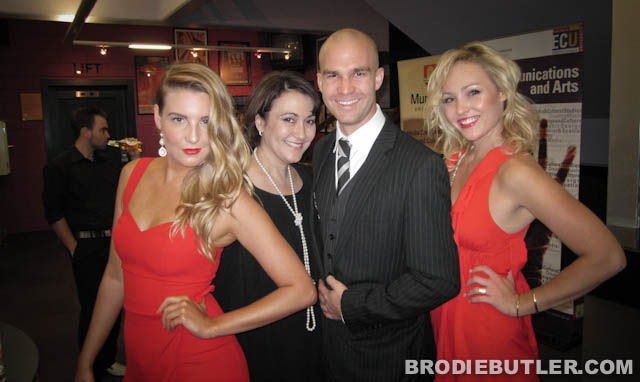 A couple of weeks ago o Saturday 19th March I attended my first ever WA Screen Awards event held in The Octagon theatre at UWA. It completely slipped my mind to post it on the blog until now.  Anwyay, the Screen Awards celebrate the Perth Film Industry and recognise & reward everyone involved in a range of different productions from short films and music videos all the way up to Feature Films.

Being my first time for me it was great to meet a lot of great people from the film industry and just see what else was out there and what people were doing.  It was also good to bump into some friends from both the old days and from other productions I’ve worked on myself and share a beer or two,or three.

There seemed to be a lot of young talent at the awards which was good to see, and somewhat intimidating actually. Intimidated by a 10 year old!  It seems you have to start young these days though.

Overall it was a fun experience and a little bit of an eye opener and I’ve already got some new contacts and opportunities ahead.  The after party didnt get as messy as I thought, but I guess we can always try again next year. haha.

Thanks Debbie Thoy for inviting me and also to Debbie and Priscilla who were my dates for the night. Probably more just keeping an eye on me and making sure I behaved.  They know what us still photograhers are like.

The image at the top of this post is of Caitlin Mary Hall,  Perth Film Network President Debbie Thoy, myself & Priscilla-Anne Forder.

Below is a photo taken by me shaking the hand of Mat de Koning, The Bendigo Bank Young Filmmaker of the Year.  Photo taken on my little point and shoot pocket cam.