So last Wednesday(27th oct) I get an email from my friend and Director A.J Carter and he tells me about some secret project that he just got asked to direct the very next day but couldn’t tell me the details, he only wanted some technical suggestions on the camera side of things which I think his brilliant DP Guy Livneh later sorted out anyway.  He then later revealed to me after filming finished, that he was directing James Cameron & Arnold Schwarzenegger in a little short protesting against Prop 23. Prop 23 is a proposition funded and backed by a couple oil companies which will essentially gut current Californian environmental laws in a bid to relax pollution & clean air laws, causing health issues & destroying thousands of clean energy jobs.

So let me just quickly tell you about the campaign. Arnold and James have felt strongly for the environment for many years. Cameron has in fact donated a ‘substantial’ amount of money to help promote the ‘No on 23’ campaign already and wanted to finish off with a viral commercial with himself and Arnold. James’ love and concern for the environment has also been evident in several of his films including his latest film ‘Avatar’ which also touches on the central theme of environmental destruction.

So why on earth is he emailing me? Well.. apart from getting to work with more of Hollywoods finest,  as it turns out this job was to be shot on a Canon HDSLR! A.J. and I have worked together before on a number of occasions both in Perth (Australia) and in L.A./Las Vegas using these new hybrid cameras so he knew I would be very excited to hear that this project involved using a Canon 5DMKII.

The Director of Photography on to take charge of this project was Guy Livneh. Guy told me they decided to go with a HDSLR as the turnaround time for post production was much quicker with one of these cameras than say a RED at 4K. It suited the project. Guy also stated they chose the 5DMKII over the 7D due the sensor, as after tests he found the 5DMKII to have a more natural colour space and a smoother image over  the 7D.

Jump in and read the article for the full story, the actual video, and see some more Behind the Scenes photos!

“It was a little daunting in pre-production as I was originally booked for another job and they only called me 28 hours before we were to begin shooting saying they wanted me to do the spot. In that time I had to book the film crew I wanted, refine the script,  and design how the commercial would look and flow.”  … says Director A.J Carter

Here is the final product, released last Thursday 28th Oct. and has already made 50,000 hits in just a few days.

So there you go. The Canon 5DMKII strikes again!

“Filming with two of the most influential men in Hollywood was a very humbling experience. It was the first time in 16 years James and Arnold had been together to film since True Lies in 1994, so the energy in the room was indescribable.”  …Director A.J Carter

“Working with James & Arnold was an absolute pleasure and was surprisingly not daunting at all. James joked on set ‘so this is what it feels like’ when I gave him direction for a certain scene. There were also a few moments where I needed Arnold to adjust his timing for his line delivery and he just listened intently and followed through next time with the perfect take. They were both true professionals and gentlemen.” …Director A.J Carter

“I think in total I cut almost 20 versions of the commercial. Myself and Cameron liked the more risqué cuts where he and Arnold played up a little, but the marketing company would always pull us back into line. ” …Director A.J Carter

BEHIND THE SCENES COMING SOON!

Now I am already working together with Director A.J. Carter and DP Guy Livneh to put together a complete behind the scenes blog post on this so you can see exactly how they did it and what they used. In fact I’ve almost finished it. How did they record sound? What lenses did they use? What lighting was used? How was the camera setup? How did they manage focus? Along with more pictures of course! Stay tuned folks…I will post it in just a couple of days.

Behind the Scenes photos courtesy of Rafael A Leyva. 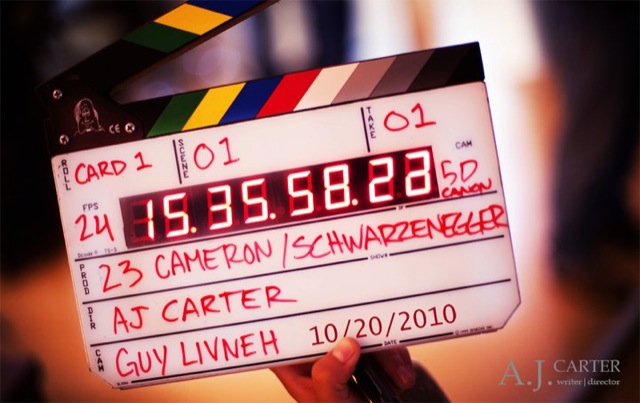 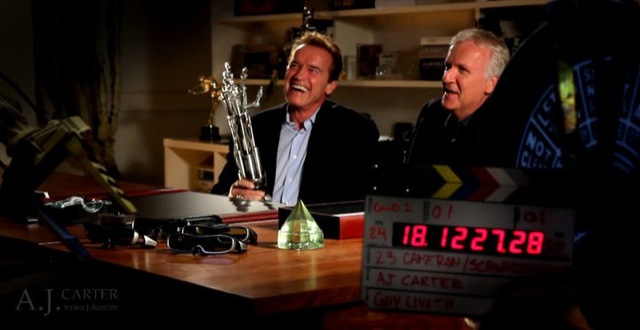 Pingback:WATCH | A Message from James Cameron: Vote NO on 23 « thephotographer4you™