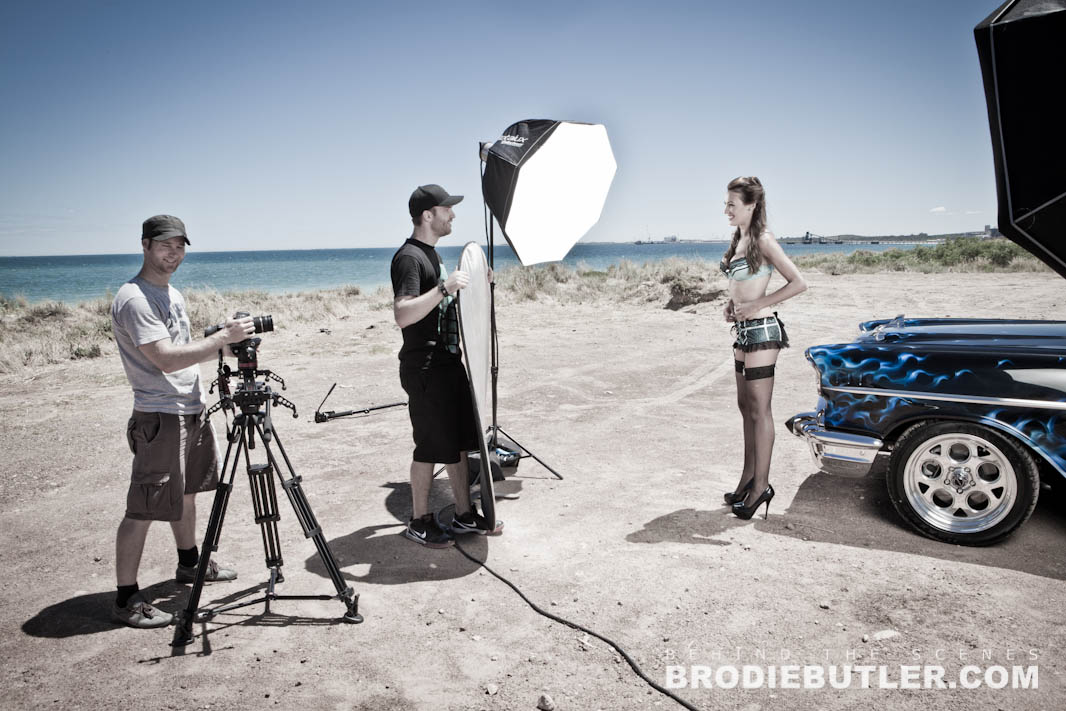 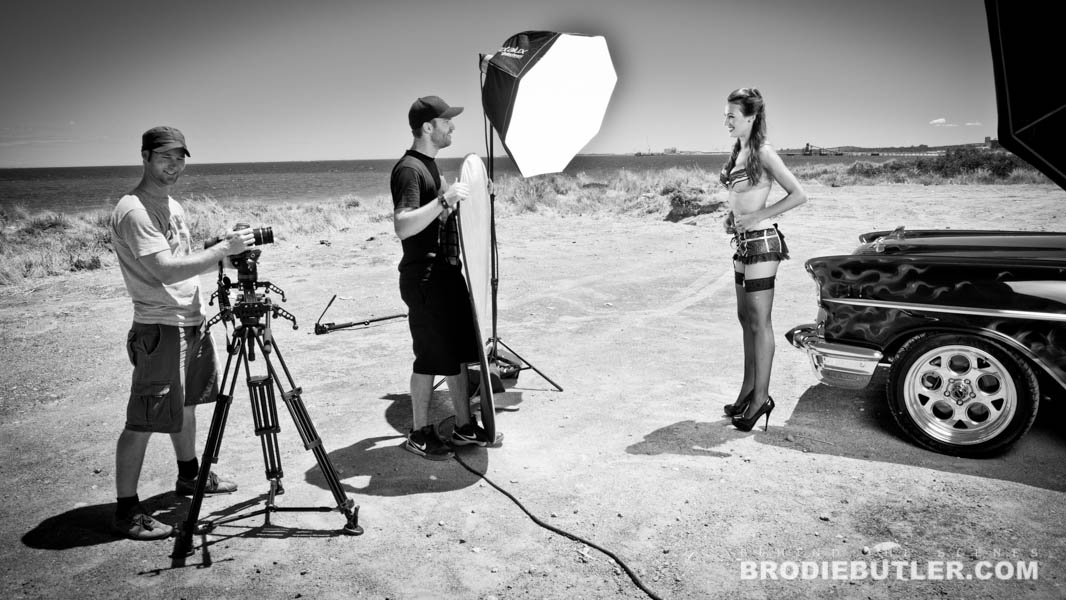 It’s been a tradition every issue of Perth Street Car Magazine to photograph one feature in the mag consisting of a car and a model, and for more than a couple of years now I have created a behind the scenes video to give viewers a little something extra to take in, and see what goes on behind the scenes of a magazine feature.

Well as of the current issue, I am sadly no longer creating the behind the scenes videos for Perth Street Car Magazine. Not only that, but together with the magazine we have decided to no longer photograph the cars together with the models for the magazine. Now obviously the cars will always be in the magazine, but don’t panic we aren’t removing the girls, we are just making a change! Change is good, and if you have seen the current issue of Perth Street Car Magazine you will understand just how good change is! Read on to the end of this article to see what the change is, I think you’ll like it.

So since we are at the end of a little era here, I just thought it might be interesting to look back at how this all started, and re-visit the hard work that has gone into the videos over the last few years by so many people. I wouldn’t mind throwing out a mention and a thank you at the end too.

WHERE DID IT ALL START?

So for those that remember the late automotive resource website that I used to run, Driveline.net.au (2004-08), you will know I created a bit of a name for myself shooting the gorgeous models with cars and publishing them as mini features on the website.  Well that eventually led me to photographing cars and models for Perth Street Car Magazine.

So back in 2009, I took it upon myself to attempt to film a Behind The Scenes video for my first magazine published car & model Photoshoot. It featured a Nissan Silvia from InStyle Customs and the amazing Kierina Gaston. BTS videos were only just starting to become popular at this stage and I really wanted to get in on the action, rebooting what I started with the late Driveline.net.au website. (those videos are that bad I’m not showing you).

Video cameras were hard to come by back then (only a few years ago!) and even harder to find were operators who actually knew what they were doing, including myself. So the first video was a bit of a low quality hand held home video, but we scraped by with it and people still liked it.

Fortunately the video world soon evolved, especially with the release of the video capable DSLRs, the D90 and 5DMKII which created one of the biggest revolutions of an industry that I’ve ever seen.

Read on to see all the videos!!!

Vince Belladonna’s Top Doorslammer Holden Torana, featuring Samantha Schoers
(Published April 2010)
For the second video, we made the move to HD thanks to shooting the video on a Canon DSLR 5DMKII. We also discovered the use of a tripod so there wasn’t much handheld shaky footage. This video features Vince Belladonna’s Holden Torana Top Doorslammer which has since gone on to win the Western Nationals. The video also features the absolutely stunning Miss Motorvation of 2010, Samantha Schoers.

Active Autmotives Holden Commodore Featuring AutoX Winner Melissa Byrne (Published July 2010)
For our third instalment we thought it would be a good idea to try and talk into the camera as well as offer a bit of  technical info to offer something to fellow photographers. Informative and instructional behind the scenes videos were just starting to become all the rage at this time and I was trying to gear towards it while still making sure I could get the shoot done. It wasn’t a complete disaster… but.. we didn’t do it again! Check out the incredible Melissa Byrne in this video who won the title as Miss AutoX, which secured her place in this magazine feature as a prize!

See a behind the scenes blog post with plenty of images of Melissa here: https://www.brodiebutler.com//////miss-autox-with-a-9-second-holden-commodore-what-you-didnt-see-in-the-magazine/

BLOONESS Holden Ute featuring Miss Motorvation 2011 Gemma L (Published April 2011)
So the video thing was working out, but now it was time to really step up our game. By this time I was right into my filmmaking as a side-hobby, but obviously I can’t film myself while I’m conducting a photoshoot. So I managed to get hold of cinematographer Liam Underwood to come and film for me. Liam owed me a favour and I called it in. Since I couldn’t stand listening to myself talk on camera like in the last video, we introduced a car owner and model interview to spice things up instead!

This has always been one of my favourite videos, I think it blended with the song nicely. It helps that longtime friend and Miss Motorvation 2011 Winner Gemma L. is in it too.

See the full magazine feature, along with actually photos and behind the scenes photos on my blog right here: https://www.brodiebutler.com//////another-perth-street-car-magazine-car-model-feature-with-miss-motorvation/

Vince Fondacaro’s 1972 Formula Blue Chev C10 Pickup featuring Kira & Asha (Published July 2011)
As if one girl just wasn’t enough, this time round we brought in two! It was actually just a once-off special occasion, and I have to say these two girls were right up there with probably the bubbliest and most entertaining girls I’ve ever worked with!  We had a bit of extra time to shoot this one, so I even had a chance to do some filming myself but Elliott Vassila took charge with a bit of help from Ralf Schubert and did most the work while I shot the stills. Speaking of bubbly personalities, Priscilla Sue came along to this one to have a crack at MC’in a bit behind the scenes. It was a difficult task with everything going on and not a lot of it made the final cut.

Brett Stewart’s Walkinshaw featuring Christie-Anne (Published oct 2011)
So the whole cinematic feel is starting to kick in by now, so to keep the look and feel going in the direction I wanted, who better than to get a couple young budding filmmakers Luke Brooks and Peter Clarke to film the BTS video. We had the dolly out and all as you’ll see in the video. The boys did a real good job on the video but I suppose its pretty hard not to shoot good content when you have a stunning Christie-Anne in front of the lens. A genuine Walkinshaw is always a pleasure to shoot, and this one came up a treat.

Danny Williamson’s 750HP Drift Silvia featuring Kristal Hammond (Published Jan 2012)
About time we had a drift car in on the action! Thanks to a call I made to Brett Wilkinson from Wilkinson Suspensions we managed to tee up Danny Williamsons incredible 750HP drift car. To join in by its side was the very well known Perth beauty, Kristal Hammond.  I recruited a friend Ross Metcalf to film this one. Ross and I had worked together on a film at the time and I’m glad he had a crack at this because he ended up staying on to shoot the other two awesome videos to follow.

For this shoot we managed to lock in internationally published model, Jacinta Rockich while she was passing through Perth which happens to be her hometown. We were lucky that her stay aligned with our proposed shooting dates so we took the opportunity! Ross Metcalf was with us yet again doing another fine job behind the camera.

The last and what looks like the final BTS video we will do for Perth Street Car Magazine, features Alex Todorovski’s amazing Holden Torana and the equally amazing Cassie Spagnolo. This was a special shoot because the issue we were shooting for was the 20th Anniversary for the magazine. So like everyone else, I love cake, and I thought it would be a nice touch to order a huge 20th anniversary cake for the shoot. Well it worked out well, but it also back fired on me badly which you will see at the end of the video!

So there you have it, the complete history of the Perth Street Car Magazine Behind The Scenes Videos. Unfortunately there were a couple of issues in between that we didn’t have the time or resources to put together a BTS video, so I’m very sorry for those that missed out.

Putting these photoshoots and videos together takes a lot of effort and would not be possible without a lot of help from a lot of people. So I would like to send out a huge THANK YOU to all of my team and friends, models and car owners that have helped me over the years with each one of these shoots.

I’d like to thank the brilliant cinematographers that came on board:
Ross Metcalf
Liam Underwood
Peter Clarke
Luke Brooks

WHAT’S NEXT FOR PERTH STREET CAR

Well do not fear, I’m not going anywhere and I will still be contributing content to Perth Street Car Magazine. The car & model feature you are used to seeing in each issue is being retired, and a new approach of photographing the model separately of any cars is being introduced. This will allow the cars to stand on their own merits and be appreciated by themselves, but we still have that little bit of eye candy to spice things up in a 2 page spread. By seperating the two, as a photographer I can pay more attention to bringing out the best in both the car and the model and they will be represented accordingly in the magazine. I’m excited about the change as you should be too!

Well hope you enjoyed this post, theres a few videos there but hopefully you had time to watch at least one. Until next time….