Behind The Scenes Filming James Cameron with the Canon 5DMKII

Recently, I made an intial post announcing to the world how another exciting project involving a couple of Hollywood heavyweights adopted the Canon 5DMKII. Well now it’s time to spill the beans so to speak and reveal all behind the scenes!

Pictured above is Director A.J. Carter with DP Guy Livneh who are the gents behind this post and have allowed me to do this so a big thank you to those guys for sharing and hopefully I’ll see you back in L.A. soon! Next to them on the right is… well, you know who. All Photos are a credit to Rafael A Leyva.

Here is the final product video for those of you who didn’t catch the last post.

THE LOCATION:
Director A.J. Carter said… “We we fortunate enough to shoot on location in Cameron’s Office in Santa Monica and were able to move and use any of the wonderful film props he had displayed. The opening scene on the left has a scale model of the mechanical AMP suit that you strap yourself into from Avatar and on the right is the actual ship’s throttle from the film Titanic.”

THE CAMERA:
Lets just clear up some controversey that derived from the last post incase anyone hasn’t read the updates…

The Canon 5DMKII was NOT used for this project because it has a larger sensor.

“It’s the color space and smoother image that I like, not the size of the sensor and shallow DOF”… Director of Photography Guy Livneh stated.

Guy has actually done some side-by-side tests when the 7D first came out and found that the 5DMKII had a more natural color space and less “jitter” when panning (at 24P).

“As far as the size of the sensor I actually prefer the 7D as it is a bit easier to focus and is a similar frame size to Super 35mm motion picture target size (Side to Side)” … Guy Livneh explained. 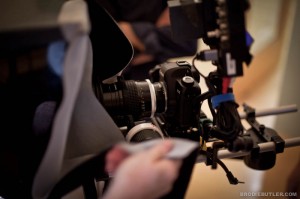 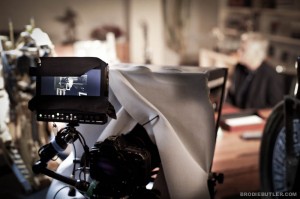 So the Canon 5DMkII was chosen due to the fact that it has a better sensor than the 7D and the post workflow is faster than when working with a Red at 4K. The original footage was very close to the final look and with very little color correction it could be graded in a short amount of time.

Important to note that this was an interesting rig because we needed to fit a full sized teleprompter to the front of the dolly so Cameron could read.  The teleprompter was operated on site via laptop and by a teleprompter operator. 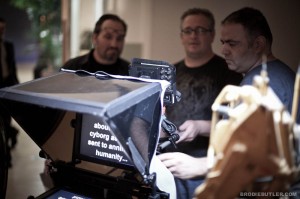 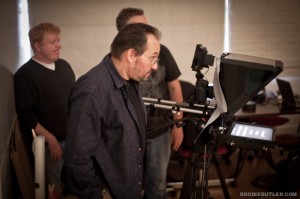 THE LENSES:
Guy stated he used mostly Nikon Primes due to their classic look. The 85mm for one, which has been known as a lens used by fashion photographers in the 70’s and also the 105mm, a classic portrait lens. There was some light diffusion on the lens (Tiffen Black Diffusion FX filter) , mostly to blend the smoother look of the Nikons with the Canon’s CMOS sensor (which can be a bit harsh at times). The wide shot was on a wider lens but Guy couldn’t recall what it was.

Brodie: “Any reason why you didnt go with the Canon prime lenses?”
Guy: “I like the Canon L Series lenses, Zooms and Primes, but the Nikons have a quality I can only call “Classic”.  It’s similar to Using Cooke S4’s over Zeiss Ultra Primes on a RED or 35mm motion picture camera. The Canon glass can feel very analytical and clean while the Nikon can have a distinct character. For stills, I do prefer the Canon glass as it is sharper than the good old Nikons.” 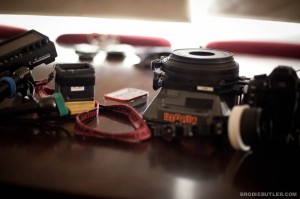 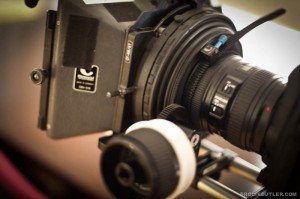 CAMERA SETTINGS:
As far as camera settings,  Guy always shoots with the lowest contrast setting (not so for the 7D). He found that with the standard contrast setting the blacks get blocked up. The shutter was set to 30fps.

A Chrosziel Follow Focus and 4X5 Matte Box was used for this rig. The tripod was a Sachtler 15 which was perfect for the weight of the rig.

THE SOUND:
Sound was recorded via a boom and mixed separately which is why they needed to slate it.

Director A.J. Carter said “We wanted studio sounding sound as the dslr doesn’t have the level of audio we required yet.”

Brodie:  “How many takes did you do? ”
A.J. Carter:  “We were only shooting for approximately 1 minute of final delivery time so there were only a few takes (15 in total). Within the 15 takes we had every angle covered. Because it was not an intricate shoot of multiple scenes and angles, we decided to slate to the time of day with frame rate so it was a very easy task to just grab the audio take that matched the timecode on the slate.”

THE LIGHTING:
“Once all is said and done, it’s the lighting, composition and camera movement that matter most.” explained DP Guy Livneh.

They used an ETC Par Can from a low angle for a kicker light and a 300 Fresnel as a back light. The key was a 1K with a Chimera and Softtools egg crate. The very light blue fill light was provided by a window we chose to leave open. The foreground was lit by a 2ft 2 bank kino flo.

The Kinoflo lighting the foreground had daylight bulbs in it. All the rest were tungsten. 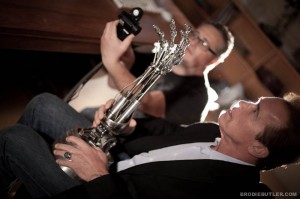 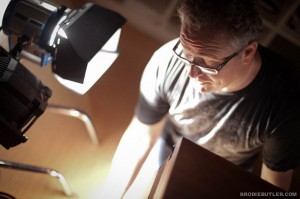 DP Guy Livneh explained… “The greatest challenge was the short amount of time we had with Mr. Cameron and especially with Governor Schwarzenegger. Thankfully they are both seasoned professionals and they nailed it. We also had to hit the ground running but after twenty feature films you get used to that and just maximize every minute you can in order to create memorable images.”

They graded it in Final cut, bumped contrast and desaturated by 22%. Added 12% spotted vignette. There were almost 20 different edits cut together and once the winner was finalised it was output to 1080P HD for youtube using the Apple Quicktime H.264 codec.

Here’s some additional behind the scenes photos: 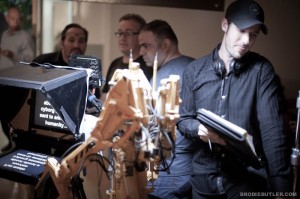 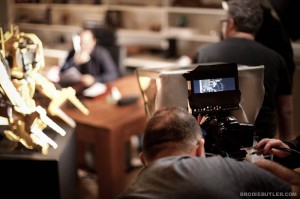 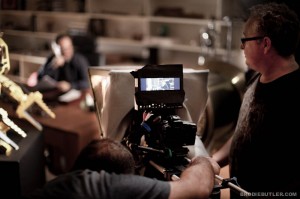 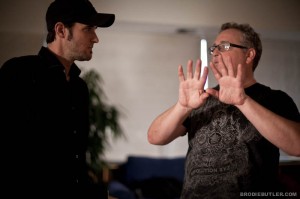 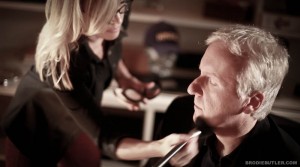 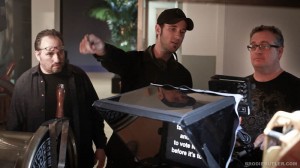 So thanks again to A.J. and Guy for sharing with us, and you can read all about this project from Director A.J. Carters point of view on his blog right here.

So there we have it, the 5DMKII strikes again.