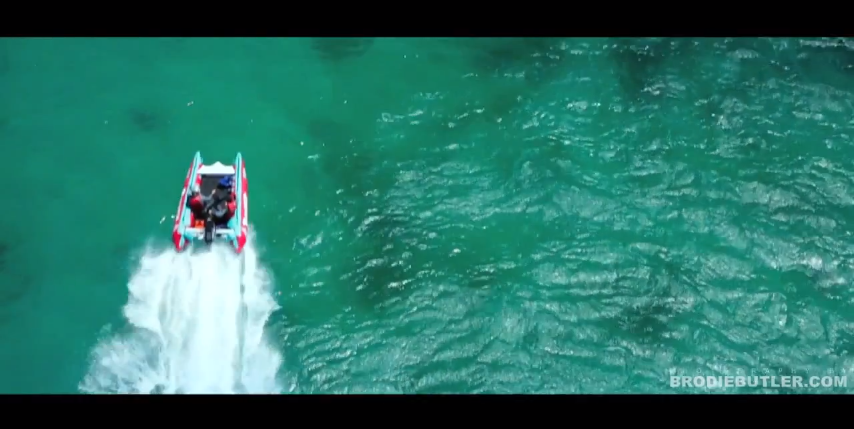 Getting quality aerial video footage from a helicopter can be very difficult, because the aircraft is constantly shaking about and can get quite bumpy. So any type of handheld footage is usually not very good and certainly no use to you if you are shooting a film.

What you need is some form of stabilisation. I get this question a lot, but  a Steadicam is not designed to be used in a Helicopter and certainly isn’t practical, you won’t even have room for it, and it just won’t work for so many reasons. The solution is a gyro stabilised mount.  These fall under the classification of ATM (Advanced Travel Mount).  A gyro will keep your camera smooth and steady and iron out all the bumps. They will basically turn your rotten shakey footage into cinematic awesomeness!

The rig I used is basically comprised of a frame with a camera mount suspended by a thick bungee cord. Hanging below this camera mount, are two ken-lab gyros spinning to keep the whole thing in a peaceful state. You can see the rig here below. I have my Canon EOS 5DMKIII with a 24-70mm 2.8 L lens attached and that is mounted onto a small manfrotto video head. This of course is all sitting on the gyro stabilised rig. The two big cylinders underneath the camera are the gyros. These are powered by some beefy batteries on the floor of the helicopter.

Looking at the back of the camera is simply not sufficient for filming, so as always I have my trusty SmallHD DP6 monitor rigged up on a Manfrotto Magic Arm and this allows me to move the monitor to the optimal position for viewing. Basically right in front of my face.

Tracking a speedy Thundercat race boat from the air may sound a little tricky, but it turned out to be a peice of cake with the help of our gyro rig. We got so much usable footage I was well impressed. This was our second test run with the rig and we tried a few new things to help improve the footage and userbility of it.

The video head was a big help. I didnt actually use the flexbility of the head, I only used it for the raised centre of gravity and for the leverage. It enabled me to operate much more easily. There is still some fine tuning that could be done in this area I think though.

Secondly, I went for a wider lens. Last time it was way too difficult shooting with a telephoto lens. I was fighting the gyros the whole time trying to keep the subject in frame and it was a bit too optimistic i think. A wider lens made things much easier and we flew a bit closer instead.

The other improvement we made, was in the pilot seat. My man Darius and myself need to be on the same page. I need to understand the capabilities and limitations of flying a helicopter, and he needs to know more of what I’m doing as an operator. I can’t shoot the shots myself, its a combination of his work and mine so we need to be in sync. Something that will come with time as well as a bit of trial and error but we are already doing well and feeling confident. It’s such good fun.

Anyway, check out the video below. This is a quick same-day edit that I put together to showcase the footage. It was hard cutting this down because we had so much useable footage, which dont get me wrong is an awesome thing to have! The cool thing about this, is that the footage has not been stabilised in any way shape or form in post production. The footage is straight from the camera apart from a couple of saturation and contrast tweaks.  Watch in HD!

Big Thanks to Nick Hale, Elliott Vassila, Brent Baskerville and Ben Graham for making it all happen.